Of Tea and Anarchy...

More plots ,valiant, fanatical or pure evil, have been hatched over a steaming pot of tea than in the clinically restrictive confines of an office. Poets and writers, chess players and actresses have swopped ideas, titillating gossip and tears over this dark golden brew from ancient times, beginning with the Japanese Tea Houses and continuing in the modern Tea Rooms of today. And let's face it...what woe, or joy, loss or scheme cannot be improved upon with the delicate chimes of teaspoons stirring a strong cup of Cha? 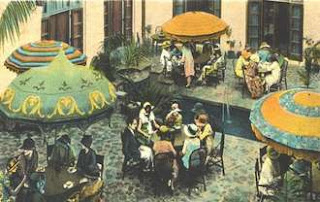 My family were Teaholics! I don't exaggerate here. Up to fifteen cups a day! My father's bark "Bring me a cup of tea!" still rings clearly in my head and I'd say it's the reason why, rebelliously, Coffee became  my drug of choice. Yet...it lacks something, coffee does, history, ceremony, grace and anarchy? Tea is a lightly euphoric experience...beginning with the choices of leaf available, the size and shape of a Tea Pot, the particular curve of a spout, the delicacy or lack thereof in the china cup, a silver or stainless steel spoon? All this is considered, reflected upon over the amiable conversation...it stands apart from the general chaos as something one can always count on to please, to turn to in times of solitude, shock or emotional disorder....or simply the fuel that has fired many an Anarchist dream of self governance...for what is there to live for, or to fight for in a world where there is no Tea? :-)
http://www.timesonline.co.uk/tol/news/politics/article6427039.ece
Posted by The Bella Vegan Tea Room at 11:28 PM